In 2018, we saw the end of an era for Fabrique Nationale. The FN P35, usually referred to as the Browning Hi-Power, was discontinued. The pistol had been in continuous production since 1935. While sales had been slow, and the MSRP had climbed to over $1,000, some bemoaned the passing of this iconic firearm. However, there is a bright horizon with the introduction of the Girsan MC P35.

The 9mm, 4 5/8″ barrel and slide have a minimal recoil, allowing for quick second shot resets, allowing the shooter to get on target quickly. The rear sight adjusts for windage drift, while the front sight is a dovetail sight. The conventional compact trigger is easily accessible and enables for a quick trigger reset.

The Girsan is recognizable as a straight up copy of the Browning MKII. This was a wise decision compared to a clone of the military-grade Hi-Power. The MKII features high-profile sights and an ambidextrous safety. The finish was matte blue. I don’t have an example close at hand, but the Girsan pistol appears to bear the same finish.

The P35 pistol was supplied with a single magazine. As previously noted, the magazine holds 15 rounds — an improvement over the original design’s 13-round capacity. The magazine well was generous, and the double-column magazine was tapered. Speed loads were easy enough. A high point of the pistol is the ambidextrous safety was well designed and obvious with a crisp indent.

Firing the pistol was accomplished with a variety of loads. I did not wish to confuse the issue with handloads and burner-grade loads, but on the other hand, 9mm ammunition isn’t exactly cheap and plentiful at this time. I had a number of handloads using the Oregon Trail 125-grain RNL bullet and enough Titegroup powder for 1,050 fps. I also had a mix of steel case Tula 9mm, a box of WPA 9mm, and some Sierra 124-grain JHP. 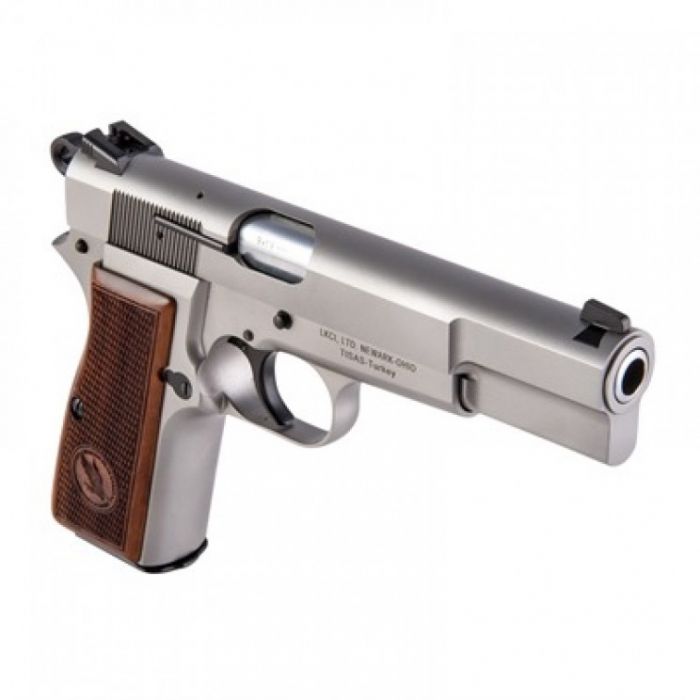 I loaded the 15-round MecGar magazine, an original Browning, and two 13-round MecGar magazines. I began the rest-firing portion of the range test at man-sized targets at 7 and 10 yards. The pistol came on target quickly and handled like a dream. The fly in the ointment was the heavy trigger.